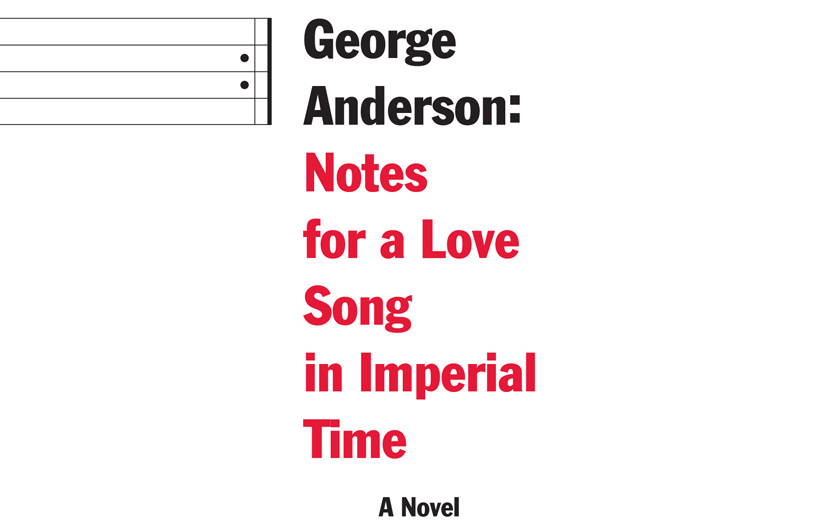 The name of Peter Dimock’s second novel, published this month by Dalkey Archive, is George Anderson: Notes for a Love Song in Imperial Time. True to its title, Mr. Dimock’s book is preoccupied with the siren songs of American triumphalism and empire, as well as the methods that might be required to break their incantatory spell. The word spell is not incidental: the grip of empire, according to Mr. Dimock, is not primarily tightened via blatant physical force, but in the more obscure realm of speech. An empire’s victory is a matter of language, and the triumph of the American empire in the past decades is manifest in the evolution of the language that structures our national narrative. How will the story be told? This is the primary concern of empire. How won’t the story be told? This is the purview of repression. As Mr. Dimock states in the author’s note:

I have been convinced for a long time now that Americans lack a language adequate to
the history we are living. This lack, I believe is catastrophic and due in some large measure
to the subjective internalization of the historical narrative of national triumph.

Given his anti-imperial bent, one might assume that Mr. Dimock is a household name on the American Left, yet he remains relatively unknown. Though Mr. Dimock is a bit of a late-bloomer as a fiction writer, he is no stranger to publishing. He spent much of his career as a book editor at Random House, where he focused on lefty political science and history titles (his authors included Angela Davis, Eric Hobsbawm, and Toni Morrison), before leaving the publishing house and starting a newsletter called Rethinking Capitalism.

His only prior novel is the excellent but seldom read A Short Rhetoric for Leaving the Family (1998), a fiery epistle in which the narrator excoriates his family members for their involvement in the Vietnam War. But, despite its virtuosity, A Short Rhetoric was not widely read or commented upon. One hopes that this latest effort will finally afford Mr. Dimock’s work the critical and popular attention it deserves. George Anderson is a rare example of strong, experimental fiction from the Left, and for all its strangeness and brevity, it manages considerable moral and political weight.

The narrator of George Anderson is one-time book editor Theo Fales, a man who spent his editorial career helping major US policymakers whitewash their autobiographies and memoirs. The short epistolary novel serves as a mea culpa for Fales’ complicity in these acts of historical revision.

The letters that form the novel are addressed to a man who is a stranger to Fales: former head of the Office of Legal Counsel (under the Bush administration) and fellow Harvard grad, David Kallen. Fales addresses Kallen because he believes the former state official to be something of a moral intimate, a fellow colluder in a diffuse and government-sanctioned crime:

My complicity summons angels singing—I know that you and I are the same
person. Somehow our entitlement to rule continues.

I am your accomplice in our class’s alchemy of national impunity. Our force of
rule, in every moment, extends beyond all law. This is the secret of all totalitarian
government.

David Kallen is modeled on a real-life figure named Daniel Levin, who briefly headed the OLC under Bush in 2004 after his predecessor was forced out for trying to repudiate memos that provided a legal basis for the CIA’s extraordinary rendition program. In his deliberations over how to interpret the vital phrase in the torture documents—“severe physical pain and suffering”—Levin chose to be waterboarded at Fort Bragg. The torture memo that Levin penned in 2004 came out unambiguously against torture—“Torture is abhorrent both to American law and values and to international norms”—but contained a footnote, demanded by the Bush administration and the CIA, that nevertheless ensured the legality of torture and provided the administration with immunity from war crime prosecution. (Soon after the memo came out, Levin was pushed out of the OLC by Alberto Gonzales and quietly disappeared into private practice.) George Anderson revolves around the perfidy of this footnote.

Fales’ letters present his correspondent with the story of the ex-editor’s personal awakening—the awakening that prompted Fales to leave his job and commit himself to the “refus[al of] empire and creat[ion of] reciprocity.” Fales provides Kallen with a tool to do the same: a functional workbook—complete with fill-in-the-blanks—the subject and promised yield of which is a new historical method. It is accompanied by an extraordinary proposal: that they meet in four weeks time to build a new American history together.

“At my method’s end,” Fales writes, “I hope both of us will have a way to approach the people waiting in Fallujah to talk with us about the common history we have made.”

The technical details of how to practice this anti-imperialist historical method comprise most of the short novel. Kallen is instructed to choose a master narrative and a governing scene—or, in other words, a personal moral tale and its accompanying mental picture. Fales’ master narrative is drawn from a newspaper: a story concerning a 108-year-old former slave named George Anderson. The method functions through montage: according to Fales, a given practitioner’s thoughts concerning the master narrative he has selected will, when placed alongside truth statements and declarations, produce a kind of moral music, an anti-imperial love song specific to that practitioner’s own state and soul.

American literature already has its Bartlebys, characters whose motivating concern is the rejection of empire. What distinguishes Mr. Dimock’s novel—other than its repetitive, trance-inducing form and unorthodox sentences (e.g., “The continuous present we impose insults the dead to no good end”)—is that it does not depict the struggle of life-long dissenters, but that of former boosters who’ve gotten wise to the situation. This is the deserting cry of intellectual elites who have spent their entire careers buttressing empire—road-to-Damascus radicals. And, like St. Paul, their struggle for (secular) redemption is all the more compelling because they, like so many of us, have experienced what it means to be fallen. In their strange and poignant struggling, there is a potential blueprint for our own liberation: and so George Anderson is a generous book, one that affords even the most complicit a second chance. Wake up! It seems to say in its hypnotic, machine-like hum. You can walk away from empire at any time.

And yet, as we get older, severing the cords that keep us bound to empire (and the society it daily produces) becomes more difficult—personal patterns have settled, and we feel entrenched by our economic, social, and financial obligations. Alluring rewards are promised to those who stick with it and don’t act out. Life becomes a form of maintenance, and the world, a vast prison yard populated by cynical and tired people who dream of early retirement. This latter dream is an analogue of the inmate’s forlorn wish: that he might be released before his sentence is up, on good behavior. George Anderson responds to this sorry state of affairs: “Within structures of complicity, reciprocity must be improvised moment-to-moment each day,” Mr. Dimock instructs. “This is made difficult by the pleasures and rewards of benefitting from atrocity.”

How do we live the true history of our time? How do we atone for our past complicity with the structures of empire? How do we enact our true historical roles and escape the pernicious cycle of “owning everything and fathers killing sons”?

The faith with which a person abides with their hidden truth is a key determinant in their destiny. But the difficulty, of course, is that the material world doesn’t always align with the world of the spirit. Try explaining a transformative personal vision or revelation to a confidant. They will urge you not to follow it, to be realistic, to not make any drastic decisions. And yet these moments of vision are the only thing with the power to change our hearts. Fales describes having a vision in 1995 at the funeral of a co-worker, but it wasn’t until 2007 that he actually woke up and made changes. In the meantime: “My career proceeded—not much changed outwardly, but I knew I could not go on after what I had seen. Then I sleepwalked—I was married and I raised a beloved daughter (well, I hope) without courage or conviction.”

This is certainly a familiar situation. Indeed, Mr. Dimock is a master mirror-maker of our late-empire anxieties and thumb-twiddling. He re-renders what is familiar; he speaks our quotidian lamentations and worries back to us. And yet, in this re-speaking, familiar musings take on historical urgency—such is Mr. Dimock’s unique power as a writer and thinker. Take for example a certain moment in the novel when, in 2008, Fales spots Donald Rumsfeld in a hospital lobby in New York, and lets the moment pass. In a letter to Kallen, he asks himself why he didn’t do anything, why he didn’t attempt a citizen’s arrest. What kept him from arresting, or even hurting, a war criminal when he had a clear opportunity? Simply by posing this question in its bare innocence and sense—if you believe person X to be a criminal when you see his actions from a remove, why don’t you treat him as one in real life?—Mr. Dimock’s character forces us to consider our own soft and ineffective modes of “dissent,” to examine the ways in which we, quietly and through inaction, agree ourselves to systems and leaders we otherwise claim to reject.

And yet the answer, like the problem, is not physical force. It is discipline and spiritual practice, of the kind outlined in the novel, that are necessary to divorce oneself from imperialism. Without a new time-sense or method to replace the structures that imperial subjects have become accustomed to, “desertion” risks becoming a temporary Rumspringa—a manic binge of nonsense, acted out as is a child’s tantrum, followed inevitably by a hapless return to the cold familiarity of empire’s embrace. Both practically and stylistically, the workbook form the novel utilizes itself possesses power—at some point, George Anderson stops seeming like fiction and takes on the hyper-logical texture of a self-help book. The form is subversive, but it manages to be radical without being didactic or judgmental. Good experimental fiction on the Left is now rare—and strong fiction about the American security state even rarer: that this book exists at all is enough to warrant Mr. Dimock serious consideration. And yet George Anderson does not merely exist: it is a hothouse flower in constant bloom, and the attention, precision and mastery of its author restores to our garden a rare and necessary genus. If only all the conflicted, ownership- and success-minded adherents of empire could read sentences like this:

My pleasure of rule extends as far as yours. Nevertheless, I saw what I saw in my
vision and have decided to act. In the time I have left I will live in the present the
one true history of my true love.

This review was drawn from the March issue of the American Reader.