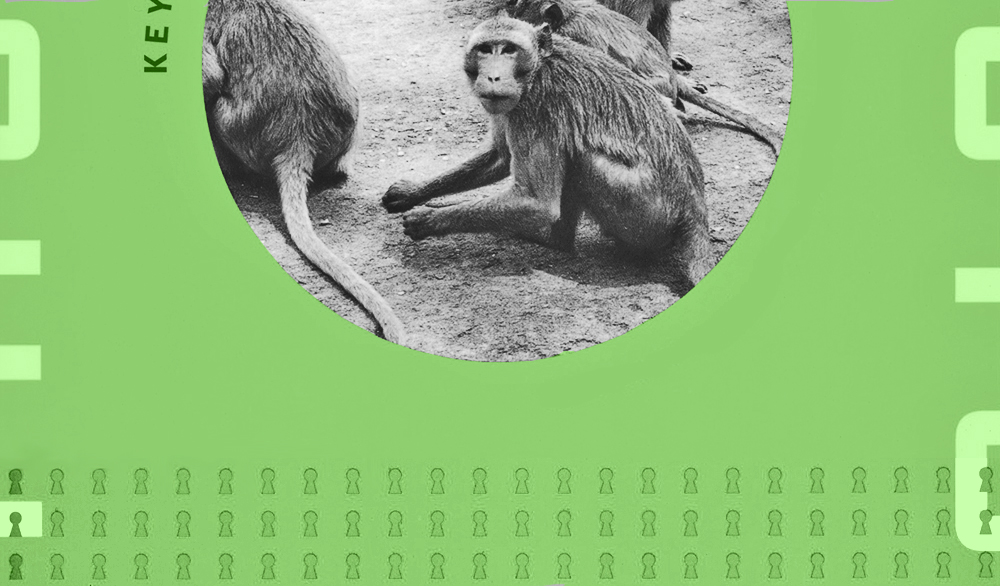 William Gillespie’s novel Keyhole Factory revolves around the outbreak of the Pandora virus and offers “a tiny keyhole through which, if one squinted with an electron microscope, one could glimpse a future without people.” Developed as a weapon in a research facility hidden under San Diego, and then released on an unsuspecting population by a rogue scientist, Pandora makes “nuclear bombs look like shiny pistols.” “I don’t even feel comfortable talking about an outbreak,” one researcher comments, adding that it “would be a crisis of unprecedented proportions, unimaginable.” The trick of Mr. Gillespie’s novel is to show how an unimaginable crisis is also, necessarily, a crisis of the imagination. Pandora triggers a global pandemic, one that carries humanity beyond its every limit or capacity, including the capacity to tell stories. Keyhole Factory then becomes a limit case for novelistic form.

The Armageddon is a longstanding literary phenomenon. Mr. Gillespie’s novel is not a new thematic contribution; rather its originality derives from its countless plot strands and typographical experiments, which are deployed to formally mirror its apocalyptic content, creating chaos in terms of structure as well as subject matter. As with any ambitious text of this ilk—think Mark Z. Danielewski’s House of Leaves or T.M. Wolf’s recent debut Sound—judgment must derive from what lies beneath the work’s glittering surface: do such postmodern high jinks truly pay off? Keyhole Factory’s experimental strands are uneven in quality but frequently brilliant. Those willing to grapple with its complexities are rewarded with a remarkable work of fiction.

Keyhole Factory begins with a satire of an academic poetry conference and a lengthy debate about what constitutes “good” and “bad” poetry. Blake Stone believes “good poetry” comes from “pure intuition,” some form of literary inspiration; his best friend Jasper Pierce takes the side of “bad poetry,” arguing against Blake for a “mechanical approach to the art” of verse. Each has an opposing senior role model: Blake turns to Claude Regan, éminence grise and aspiring Poet Laureate, while Jasper approaches Max Winchester, who has never published a book of poetry but once performed with the Sex Pistols and Captain Beefheart. Blake lives off “his vast inheritance” while Jasper takes a dishwashing job, both competing for the same MFA fellowship and each as self-absorbed and intolerable as the other.

For a work of apocalyptic fiction, this may seem an odd starting point: there’s no obvious link between Armageddon and poetic infighting. Yet Keyhole Factory suggests that the rise of “end times porn” as a genre is rooted in both political gridlock and imaginative loss. The two are not easily separated. To make its point, disaster fiction often uses global cataclysm—total war, nuclear meltdown, whatever—as a stress test for novelistic ideals. In the case of Keyhole Factory, Pandora’s outbreak at the end of the first chapter triggers not only chaos within the novel but the disintegration of its very narrative structure: the novel then becomes a ceaselessly inventive attempt to convey the fragmentation of human society when hit by global disaster. Initial structural parallels—“good” and “bad,” Blake and Jasper, Claude and Max—explode into a vast spectrum of narrative tangents: this rupturing of conventional form is itself a satire on these fictional poets whose concerns for literature are inward-looking and arbitrary.

Indeed, much of the comedy in this opening section derives from poets being so focused upon their own verse that they pay no attention to international events leading up to the Pandora pandemic. Jasper reads the headline UNITED STATES DECLARES WAR ON CHINA only for the purpose of versifying it. Blake is so preoccupied by the merits of his own poetry that a story entitled MARCH ON WHITE HOUSE, DOZENS EXECUTED has no effect on him. The question at Keyhole Factory’s heart is not a superficial one about “good” and “bad” poetry, but rather about how literature can possibly encompass and render the chaos of worldwide destruction.

Previously published in 2010 by Spineless Books, Keyhole Factory has now been picked up by Soft Skull Press and given a wider release. Spineless is Mr. Gillespie’s own publishing house, founded on the twentieth of February 2002, the same day it released Mr. Gillespie’s 2002: A Palindrome Story in 2002 Words. That Mr. Gillespie chose a palindromic date (20-02-2002) to found a publishing house whose first release was the world’s longest palindrome is emblematic of his earlier writing. Marked by Oulipo-inspired constraints, metatextual commentary and experimentation with online media, works such as The Unknown (1998) and The Story That Teaches You How To Write It (2005) bristle with formal trickery.

While Keyhole Factory is far from conventional fiction, it is the closest that Mr. Gillespie has come to writing a traditional novel. Within its fictionalized world references are frequently made to Mr. Gillespie’s earlier writings, which can largely be categorized under the “systematic operations” and “mechanical approach” to writing that “bad” poets in Keyhole Factory admire. Max is jealous of a writer who has written a longer palindrome than he. Jasper becomes infatuated by Newspoetry, a website which publishes versified news stories: this site exists in real life and was launched by Spineless Books. This may sound like Mr. Gillespie is firmly rooting for one side in the debate between “good” and “bad” poetry (the chapter is titled “The Bad Poet”) but neither faction escapes critique. Indeed the novel’s point is that such debates are themselves arbitrary: Keyhole Factory’s opening compels the reader to solve this riddle over “good” and “bad” while simultaneously mocking us for doing so and offering no definitive answer.

To do justice to the novel’s scale and complexity after this opening section is all but impossible. Keyhole Factory is divided into twenty-two chapters, each given a different title and pictorial symbol that relate them to one another and to the text itself. Its characters are a seemingly random assortment, including a poet-astronaut returning to Earth after a fifteen-year voyage, a blind political activist inexplicably gifted with prophecy and a microbiologist developing the Pandora virus in an underground military complex. Some recur across chapters while others appear only once. It is rarely clear who is speaking when, further blurring individual identities.

Overarchingly, characters are united by their individual responses to the Pandora outbreak; more intricately, their narratives are woven together through an implausible labyrinth of familial relations and chance encounters. Even the insular coterie of poets savaged in the beginning of Keyhole Factory start to repeatedly appear in the lives of others. This structure creates a novel whose intersecting plots are meticulously crafted yet chaotically sprawling; indeed, its desired effect is a contexture that must be read and re-read in order to reward anything close to a comprehensive understanding. Mr. Gillespie credits this “webwork” technique to the obscure twentieth-century writer Harry Stephen Keeler. While namedropping Keeler may grant Mr. Gillespie a certain literary exoticism, his style is also reminiscent of more prominent novelists such as Thomas Pynchon and David Foster Wallace, the latter of whom taught Mr. Gillespie at Illinois State University and whose praise adorns Keyhole Factory’s front cover. Like the characters of Gravity’s Rainbow, living in fear of the V-2 rocket, or those of Infinite Jest, seeking out the film of the same name, Mr. Gillespie’s disparate cast is placed within the larger unifying context of global annihilation.

Typographical experiments present further difficulties. In one chapter text appears in bubbles, each of which represents the dying thoughts of a single Pandora victim. In another, “Election Day,” eleven voices run horizontally along the page and must be read independently and then compared (some are linked, others not) in order to make sense of their responses to the outbreak of the virus. In “Wildfire Vectors,” blocks of text are superimposed onto a map of the world, each sentence describing the country on which it is printed:

The actor shares
a needle in the
back room of a
Mexico City
canteen, just this
once.

The Baku
businessman
coughs, explain-
ing the Soviet
warheads he has
for sale.

All of these techniques are designed to fracture the text while offering a semblance of unity: the reader must consider each fragment on its own and in relation to others, each chapter in relation to its place within the novel as a whole. In this way, the chapters’ pictorial symbols are characteristic of Mr. Gillespie’s wider concern for Keyhole Factory. The reader’s desire to relate them to each other and to the chapters they govern creates a quest for false meaning, as if relating hieroglyphs of cigarettes and typewriters to their respective sections can somehow repair the novel’s fractured narrative. The repetition of choice words across chapters works in a remarkably similar fashion: terms such as “fire,” “syringe,” “tentacles” and “cancer” are stressed until they take on a quasi-symbolic significance. We hear them echo throughout the text and are drawn into believing that such repetitions may signify everything. It is just as plausible that they signify nothing.

All of which may make Keyhole Factory sound off-puttingly difficult, a work to which avant-garde clichés such as “genre-defying” or “mind-bending” can be readily attached. It is true that some sections succeed and others do not. It is also true that sustaining such intensity over several hundred pages, while simultaneously rejecting narrative reconciliation, is an almost impossible task. Yet for all its verbal trickery, the novel contains passages of lyrical beauty as well as segments that could easily stand alone as great dystopian short stories. It is also darkly funny. At one point, the poet-astronaut’s ex-wife explains why the two divorced: “I was never into having a long-distance relationship with anybody…especially not the longest-distance relationship in history.”

Mr. Gillespie’s wry sense of humor is always at play, right from Keyhole Factory’s opening sequence, which self-consciously mocks the postmodern somersaults that its author has performed in the past and performs again in his latest work.

This self-deprecating strand demonstrates why the novel’s conventional opening is not just a preamble to more elaborate linguistic experiments. It is an important setup, in which Mr. Gillespie shows us that, while he cares about theories of poetry, he is not afraid to acknowledge their shortcomings and to measure their worth against the greater issue of how the novel can adequately represent disaster—which can itself be an altogether different kind of poetic concern. In a recent interview, Mr. Gillespie commented that he started writing Keyhole Factory at the time of 9/11, drawing upon the chaos of the World Trade Center attacks to produce a novel equivalent to the fallout from that global crisis. “I imagined a trauma so global and shattering that there would never be that official narrative of what happened, just a lot of conflicting interpretations.” Labored over for ten years, Keyhole Factory offers us this series of interpretations, frequently brilliant, none of which can be viewed as definitive and which do not and cannot combine into a satisfactory whole. It is a remarkable vision, but a vision that comes only through a keyhole. We are never offered a key to this lock. There may not even be one.

This review appears in the December print issue of The American Reader, on newsstands now.