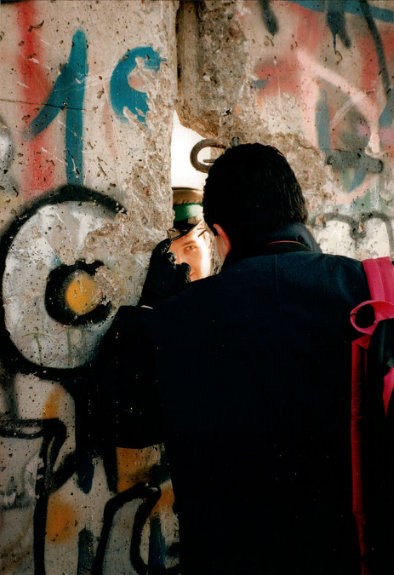 The Berlin Wall stood for less than thirty years, and was imagined, somewhat simplistically, as dividing east from west. In reality, it cordoned off an enclave of the west from the “anti-fascist” east that surrounded it. It was, at any rate, the quintessential Cold War symbol. No, more than a symbol, it was a matrix out of which images and narratives spilled: barbed wire and makeshift air balloons, Checkpoint Charlie and Ronald Reagan, Bowie’s “Heroes” and David Hasselhoff. Indeed, many narratives of the Cold War seem to end here, with the consequence that its fall has come, metaleptically, to represent the end of the Soviet Union that would survive it two years.

If, moreover, we had to pick a place where the wall-ness of the Berlin Wall was particularly concentrated, it would be the Brandenburg Gate, a relic of the late eighteenth century, restored just after World War II and stranded after 1961 between both parts of the Wall. That eighteenth century gate and twentieth century wall line up is, however, sheer coincidence. Travelers familiar with other European cities—London and Paris, say—might imagine that the “wall” in question here was a medieval one, but Berlin (“Chicago on the Spree”) is a relative upstart of a city. The wall to which this, among other gates, referred was the Berlin Customs Wall (Zoll- und Aksizemauer), created by the Prussians in the 1730s to replace the fortifications that surrounded the rather small medieval city.

Still, this nine-mile loop surrounded a fairly small area, compared to the full loop of the Berlin Wall, which required nearly seventy miles to separate West Berlin from both East Berlin and the surrounding suburbs. But there is, not merely inside the area of the “other wall” but even just along it, a great concentration of other spaces, none maintained as symbolic openings along the lines of the Brandenburg Gate but nearly all of them recognizable in the names of streets and plazas. Walls, it seems, can be torn down without disappearing from the urban fabric. Whether in Cold War nostalgia or workaday squares, they find a way of living on. 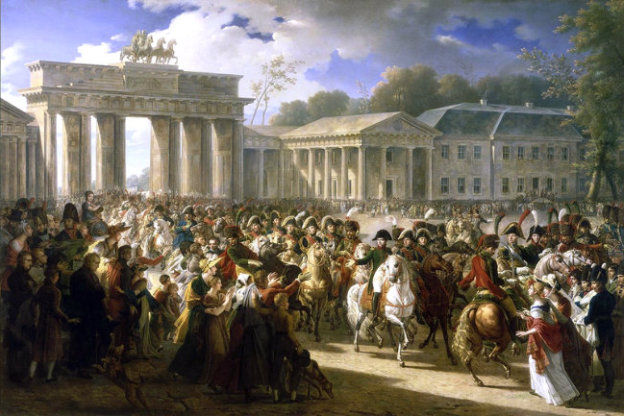 Indeed, there were no fewer than twenty gates, nearly all of which were named for places to be reached from the corresponding opening. Leaving aside the two gaps for the Spree (one “higher” and the other “lower”), a third crossing over a canal, and one simply called the New Gate, we are left with sixteen other gates, all of which reference a variety of destinations to be found “out this way.” There is a staggering diversity in these destinations, which include several former towns that are now part of the much larger city-state of Berlin (like the suburb of Rosenthal), a major city one hundred fifty miles away (Hamburg), and a region, Silesia, that is now mostly Polish.

These place names, survivors of the demolished wall, thus affect an undeniable distortion of the geographical imagination, no less distorted than Saul Steinberg’s “View of the World from 9th Avenue” but in a remarkably different way. Twenty gaps in a wall do not make for ignorance of what lies beyond (Jersey? Kansas City?), but rather for a great density of reference. Let us imagine that a hardy and geographically knowledgeable tourist walks this nine-mile circuit, and in so doing finds her mind drifting toward the destinations suggested by each of the gate names. In so doing, she is mentally tracing out a much longer, and far less regular loop, varying in width from dozens to hundreds of miles.

In The Practice of Everyday Life, Michel de Certeau describes a Gallic pedestrian poetry that seems akin to this. He describes a friend from the town of Sèvres who “drifts, when he is in Paris, toward the Rue des Saint-Pères and the Rue de Sevres, even though he is going to see his mother in another part of town.” But de Certeau is fixated on the arbitrary here: he speaks of sentences, constellations, worn coins. He is more preoccupied with place names that have had their origins largely obscured.

Let us contrast the experience in the German capital, which brings to mind for me typical Midwestern towns, all of them crisscrossed by roads named for neighboring cities. My grandparents used to append the definite article to these roads (“the Indianapolis Road” “the Lafayette Road”), with the effect that a trip to the mall or the ice cream place became a fractional part of a larger journey. Rather than a collection of curios, such names make a town seem ordered and information rich. While not as exact as a compass, Berlin begins to seem denser with information about direction and destination than the Paris that de Certeau evokes.

To be sure, density is a vital piece of this puzzle, as the physical and linguistic relics of the wall manage to emphasize the flânerie of our cosmopolitan pedestrian over the towns and regions that have lent their names. There is a much smaller percentage of people, in Germany or throughout the West, who could identify the town of Brandenburg than could identify the Brandenburg Gate. Indeed, with the exception of Hamburg (Beatles, beef patties) there is hardly anywhere one might expect the average American to identify. What about the Frankfurt Gate? a frequent flyer might object, only to learn that this one points to the east, to a smaller Frankfurt and not the banking hub to the west.

There are relics of the Customs Wall other than remnant names. Along one southern stretch the first, elevated stretch of Berlin’s U-Bahn network was built, allowing for a great concentration of stations with “gate”-names. And to the northeast, trams preserved by the thriftier East Germans run along broad boulevards where this wall once stretched.

But the ultimate fate of the wall is not merely to leave remnant spaces, be they lines or open squares. It is, rather, to reinforce, even in its absence, the primacy of inside over outside, of capital over province, of city over town. This supposedly outward looking ring survives as a centripetal conceit.