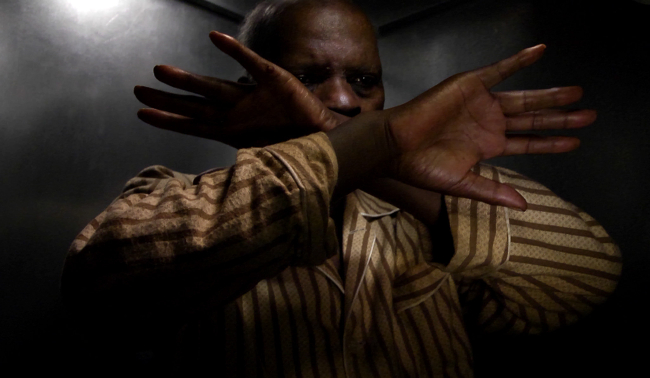 Clarissa Dalloway. Leopold Bloom. Hans Castorp. We’re familiar, even intimate, with the great characters of twentieth century narrative. But what about now? In the wake of Knausgaard’s My Struggle, it would be easy to pull a Person of the Year and inaugurate “the self” as the exemplary character of contemporary narrative. But this maneuver would too readily stoke the rage that lies beneath the widespread claim that we are all narcissists now. It would also gentrify the existence of one character that, to my mind, stands above all the rest: Ventura.

Ventura made his debut in Pedro Costa’s slum epic, Colossal Youth. The film, without question one of the great narrative works of this century, visits the demolished slum Fontainhas in Lisbon, Portugal, where Ventura once lived. Only now Ventura, like a hybrid of Tiresias and Odysseus, seeks out his metaphorical children, his fellow slum dwellers, in the aftermath of the slum’s clearing. The film culminates in a scene where Ventura lounges among the artworks of the Gulbenkian, an edifice that he helped build many years before. A longueur that shows Ventura standing in mythic glory next to Rubens’ Flight into Egypt doesn’t so much erase the boundary between high and low (or bourgeois and lumpen) as raze it.

Not an actor, not a non-actor, Ventura has become more than both. And, fortunately, it was announced this week that he will return in Pedro Costa’s Horse Money, which will debut at the Festival del film Locarno.

For the past few years, The Appendix has consistently churned out some of the internet’s most interesting work in world history. Ranging from Chinese ghost stories to Pirate surgeons in Panama, their subjects are both eccentric and global. And their tone gracefully straddles the academic/popular border; it’s at once expert and engaging. This week’s featured Appendix piece, “We’re a Zambian Band,” contains everything I want from a history article; it’s at once a fascinating portrait of an African psychedelic/funk band and a snapshot of a particular moment in Zambian cultural history. In many ways it’s a traditional rock and roll story (and includes a Sugar Man-esque search), but the connection to Zambian history and independence makes this more than just another Behind the Music.

And the music is great. The band profiled, the Witch, has made some music that has eaten up my week on its own. Some of their songs sound like lost American garage/psych nuggets, while others sound more like Nigerian funk/Afrobeat. One of their later, disco-tinged albums was also recently re-released. In the last decade or so labels like Numero Group and Soundway Records have done amazing work releasing long-unheard music from vibrant world music scenes; if this Appendix article is a part of a Zamrock revival, I’m all for it.

All creation, it might be supposed, is a translation of one sort or another—if only a carrying across of the noumenal to the phenomenal. Appropriate, then, that one of my very favorite works of literature was first written in French, though I first read it in English. Georges Perec’s La Vie mode d’emploi (Life A User’s Manual) is not simply a novel, or novels: it is a perpetually recursive puzzle; an experiment in form and self-imposed constraint; an encyclopedic swath of the texture of reality.

The book’s central premise is to tell the stories of the residents of a Parisian apartment block, 11 rue Simon-Crubellier, and principal among these are the designs of the eccentric Bartlebooth and of the painter Valène. At just before eight in the evening of June 23, 1975, Perec conducts us through the plan of the building at the wheel of an Oulipo vehicle, his—and our—journey through each room dictated by the movement of a chess knight. People, objects, activity, allusion: all are governed by complex mathematical rules, based around Euler’s Graeco-Latin squares, although at least, unlike in Perec’s La disparition, “e” is a constant. I believe there’s a joke in there, unless I’m being irrational.

In spite of these strictures, however, or perhaps because of them, reading La Vie mode d’emploi is a delight. If the scholarship is substantial, the storytelling is sublime: simulacrum and simulation, Perec’s invention is as absorbing as it is transcendent. David Bellos’ English translation is more than adequate for non-Francophones, and after all, literary paintings such as Life A User’s Manual convey an aesthetic illimited by linguistic bounds, although I will preserve the original of the novel’s epigraph— a quote from Verne—in exhorting you to take it up: Regarde de tous tes yeux, regarde!