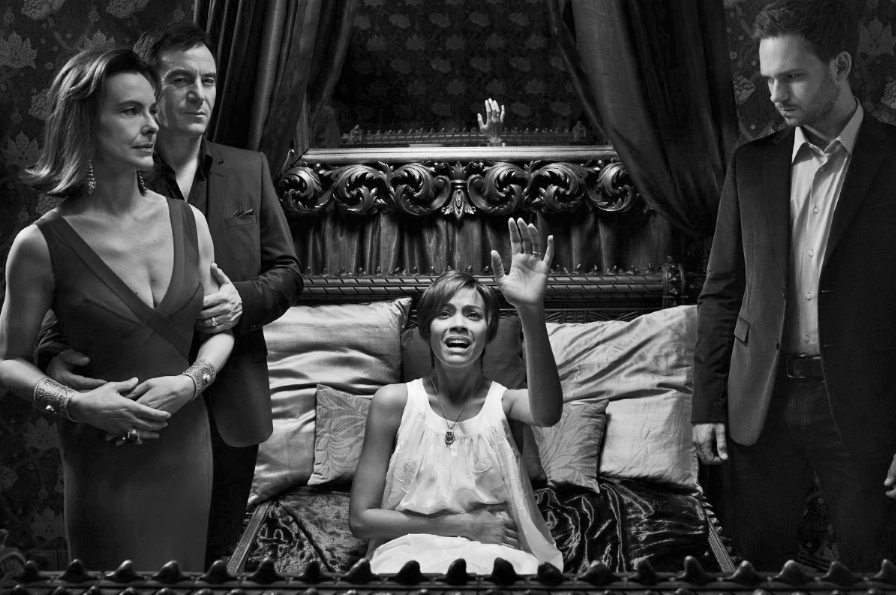 News of NBC’s miniseries remake of Rosemary’s Baby, starring Zoe Saldana, and featuring—sigh—a black-clad coven, was this purist’s nightmare. Why, the refrain goes, remake something that was already so good to begin with? (See also: Carrie.) Especially when there are plenty of bombs out there—like Dune or Gigli—practically begging to be transformed? But in pondering why Hollywood so often attempts to fix unbroken things, I hit upon what might be a palatable explanation for this trend: an artist, understandably, wants to work from a pristine piece of marble, or sketch from a masterpiece, or restage a wonderful play. In short, the original work itself must be of merit to inspire creative effort (this means Gigli’s out). In this case, we so often think of the 1969 film version, directed by Roman Polanski, as the embryonic material, but in fact it is the brilliance of Ira Levin’s novel Rosemary’s Baby, published in 1967, that keeps people returning to the story.

Suspense novelist and playwright Ira Levin’s background could easily be summed up as “nice Jewish boy from New York”: Manhattan-born, Horace Mann-educated, New York University graduate. After finishing college in 1950, Levin took a job writing scripts for army training films, and he retains the tight, spare style required for that form in his novels. His debut, A Kiss for Dying, about a man who tries to murder his way up the social ladder, was published in 1953, but it was Rosemary’s Baby that earned him instant éclat. The story, written with little narrative clutter (so you can better hear your heart as it begins to race), goes like this: a nice young couple living in New York City named the Woodhouses move into a storied apartment building and befriend their quirky, elderly neighbors, the Castavets. Roman Castavet, who claims a long history in show business, manages to most impress Guy Woodhouse, who is an actor, and the young man begins spending late nights with the people his wife Rosemary intuits might be acting as “surrogate parents.” It’s Rosemary who dominates the narrative, though—sweet, simple, and utterly devoted to the domestic sphere, Rosemary spends her days redecorating their new place and fretting over Guy’s often inscrutable behavior, which she chalks up to artistic egomania. Levin revisits Her marital problems are put on the back burner, though, when she discovers she’s pregnant. That the baby isn’t what we call “healthy” is probably something I don’t need to preface with “spoiler alert!”  The story of Rosemary and Guy is often seen as an allegory for the pitfalls of pursuing surface perfection. This is a common theme for Levin, most notably revisited in his book The Stepford Wives, also, made into a movie. Inspired by the tony, homogenous suburb of Wilton, Connecticut, the book tells the story of a couple with two children who abandon the city for quieter, more bucolic surroundings, and find themselves in an eerie hamlet where big-breasted wives seem to adore vacuuming and waxing the floors.  This, naturally, is more disturbing to Joanna, the female half of the Eberharts and a card-carrying women’s libber, than it is to her husband, Walter.  Like Rosemary before her, Joanna begins to pick at the edges of her life, fearing that something perfidious lurks beneath the carefully papered wall. And like Rosemary before her, she finds herself questioning everything she thought she knew well, including her sanity, the strength of her marriage, and the virtue of the American Dream.

Because the original movie version of Rosemary’s Baby follows the book so conscientiously—Levin himself called it “possibly the most faithful film adaptation ever made”—the experience of reading the novel for one familiar with the film is a bit like getting to know a fond acquaintance on a deeper level. All the plot pivots, lines of dialogue, and historical signposts (the Pope’s famous 1967 visit to New York, for example) are the same in both. Polanski even transferred Levin’s sly self-referential humor into the film. For example, in the novel, Levin has Guy Woodhouse bitterly reading the theater reviews, including one for Drat! The Cat!, which happened to be a real Broadway show written by Levin himself. In the film, Polanski cheekily casts the actress Victoria Vetri to play an early victim of the Castavets, and has Mia Farrow mistake the young woman for her real self during a scene in the building’s basement. (There is also a reference to the Dakota in the book—“Go to the Dakota… if you’re dead set on nineteenth-century splendor!” a friend tells them—but as to whether that’s a meta-joke, I have no idea.)

But thanks to the expansive, malleable quality of literature, the issues only coyly referenced in the film—Rosemary’s lapsed Catholicism, Guy’s increasing remoteness, and her later ambivalence toward her demonic offspring—are explored in greater detail, and with aplomb on Levin’s part. He is truly, as Stephen King once dubbed him, “the Swiss watchmaker of the suspense novel” in that a close reader can see the meticulous, almost algorithmic precision of his plotting, and the way reality—or is it Rosemary’s sanity?—falls away piece by miniscule piece. The way he has Rosemary happily gush at her husband’s lying prowess on page four, for example, and then, after he rapes her while she’s passed out, look back and wonder if perhaps this talent had been a warning sign she had overlooked. “He was an actor; could anyone know when an actor was true and not acting?” The way the ranting of an enraged Minnie Castavet become part of the fabric of Rosemary’s dream, woven into the usual Freudian day residue. The clue, which is the shrieking request for someone “young, healthy, and not a virgin,” is successfully planted, but because it swirls within memories of Rosemary’s Catholic girlhood, we are not disturbed that she doesn’t seem to take note of the harbinger, as we often are in works of horror. “Why doesn’t she just call the police?” we think in exasperation. “Why is she running up the stairs as opposed to out the front door?” But here, we recognize that Rosemary is a frog in a pot of water that is being oh so slowly brought to a boil. Don’t we all dream strange, inexplicable, sometimes dark and shameful things? And don’t we all shrug off our romantic problems, and our neighbors’ idiosyncrasies, and anything that may look irregular for the sake of convincing ourselves that reality is knowable, and that existence itself is a safe enterprise?

It is Polanski’s recognition of and adherence to Levin’s genius of timing and subtlety that makes the 1969 version such a classic. Polanski himself, though a very gifted filmmaker, does not have perfect suspense pitch, as is evident in the occasionally laughable (though still lovable) The Tenant. Miniseries director Agnieszka Holland (Europa Europa, The Secret Garden) doesn’t have that sixth sense either—maybe it’s a Polish thing—and when she succumbs to the temptation to be florid and use stock horror ideas in this “reimagining” of Levin’s story, she fails most spectacularly. To approach this as a “reimagining” (her word) rather a straight remake was a good idea—given that we all know the story and its conclusion by now, the surprises have to come in the style and not in the denouement, which it would be sacrilege to change. (Roughly the equivalent, I would say, of making a movie version of Moby Dick that ends with the crew of the Pequod feasting on whale burgers.) So Holland makes a series of calculated changes to the story on the spectrum from faintly suggestive to obvious and heavy-handed. Unfortunately, just a handful of these are well executed, namely Rosemary’s having suffered a previous miscarriage, the couple’s move to Paris, the tragic fate of the previous tenants of their apartment, the is-it-homosexual-or-is-it-just-French way that Castavet mere is always touching Rosemary’s, or commenting on her ovulation cycle, or kissing her on the mouth. There are a few tiny flashes of genius, too, namely a shot of Rosemary and Guy having a moment in front of a painting of a swaddled baby, suspended on a black canvas. Ultimately, though, the vast majority of her changes are missteps, particularly those that involve blood, organs, and showing the face of the actual devil, blue eyes flashing, in flagrante delicto. The success of Levin’s initial idea—woman slowly realizes she is carrying Satan’s offspring—is its noticeable absence of gore and monsters. It counter intuits our expectations by making the threat invisible, or at least benign in appearance. In another of Levin’s books, The Boys from Brazil, about Josef Mengele’s plot to clone Hitler, Nazi hunter Yakov Lieberman laments, “Just once, I’d like to meet a monster who looks like a monster.” Holland’s biggest mistake is that she showed us the monster, and he looked like a cartoon.

The final, and most inescapable, flaw of the miniseries is the casting. Zoe Saldana is vibrant on-screen, the Castavets are feh, but Guy Woodhouse is inexcusable. John Casavettes, who played the character in the Polanski version, was dynamic, slightly awkward, and temperamental; he wore his professional angst and his ambition on his face. Patrick J. Adams is an utter milquetoast, and everything he does and says is unbelievable simply because one can’t envision a desirous thought passing through his brain. Desire, particularly Guy’s, is immensely important to the character, and to the story as a whole; without Guy’s desire for power, for recognition, for financial and critical success, he would never be vulnerable to the Castavets’ seduction, and the whole structure falls apart. In this story, as in many of the tales in Levin’s oeuvre, the male figure comes to believe not only radical theologian Thomas J. J. Altizer’s claim that “God is Dead,” an esoteric theory of Christianity which figures prominently into Rosemary’s Baby, but that he himself deserve to take the place that He has vacated. His needs—for a book deal, a good role to jumpstart a floundering career—come before the needs of anyone else. Perhaps this safe and horrible casting choice—of a conventionally attractive actor (if skinny is your thing)—is really a part of that same cultural inability to tolerate subtlety. Now, our devils eat beating hearts, and our love interests have well-defined cheekbones. The banality of evil, indeed.