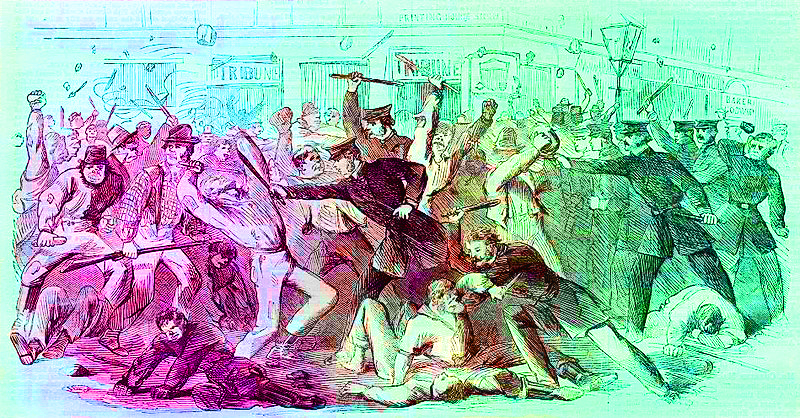 This poem was drawn from “The Insurrectionary Turn,”  a portfolio of new political poetry curated by Joshua Clover, which  appears in the November print of  The American Reader. Clover’s introductory essay, as well as two additional poems, can be found here.

And there we were.

The light that fall was somewhat golden.

The trees held their leaves for longer than usual and it was warm in a cool sort of way.

And we walked with this mist or fog or smoke and amidst it also and we breathed it in, deep.

It cloaked us. From the inside.

That winter the wolf came.

Came to us. Came near to us. Walked toward this fog of us.

He was two and a half years old and he was the first one back.

He was alone. Wandering over mountains. Across highways. Through forests.

Back and forth he went. Alone.

He was looking for others.

They were not to be found.

Yet he was mutual, we noticed, he cavorted with coyotes.

What else could he do?

He was the only one, not as in the chosen one, but as one of the un-eradicated ones.

We called him OR7.

That winter, as OR7 walked to where we were, although not with any desire to be with us,

we waited for the mist, the fog, the smoke to turn into the rains,

But the rains never really came.

Or came so late that we barely noticed them.

When they arrived, we just put up a tarp and waited them out.

Together. There. Under the tarp. For a few minutes. Unevenly, there. But there. Together. Still.

That tarp is a version of what mattered. Together.

That winter, we were mainly men.

Not at first, but later,

At first, it was hard to say.

We were so many different things.

That was the idea.

By the end though, by winter, we were mainly men.

And those of us who were not men circled around each other unevenly.

Still learning though. Still. Together. We had no other choice.

That winter every time we wrote the word “interest” we replaced it with the word “love.”

everything suddenly written in our pentameters, our

alexandrines, our heroic couplets, which was often an

associational sentence based quiet line, one indebted to lyric

almost never a description of this beloved, no listing of their

red lips, their firm breasts, their smooth skin, leaving a sort of

I could tell you of the other things too.

We lost all the skirmishes, even the one called the PR war.

But that winter, we were there.

Under a tarp. Close. Together

Just dealing with. Together. Went looking and found coyotes.

For the complete portfolio, purchase our first issue here.