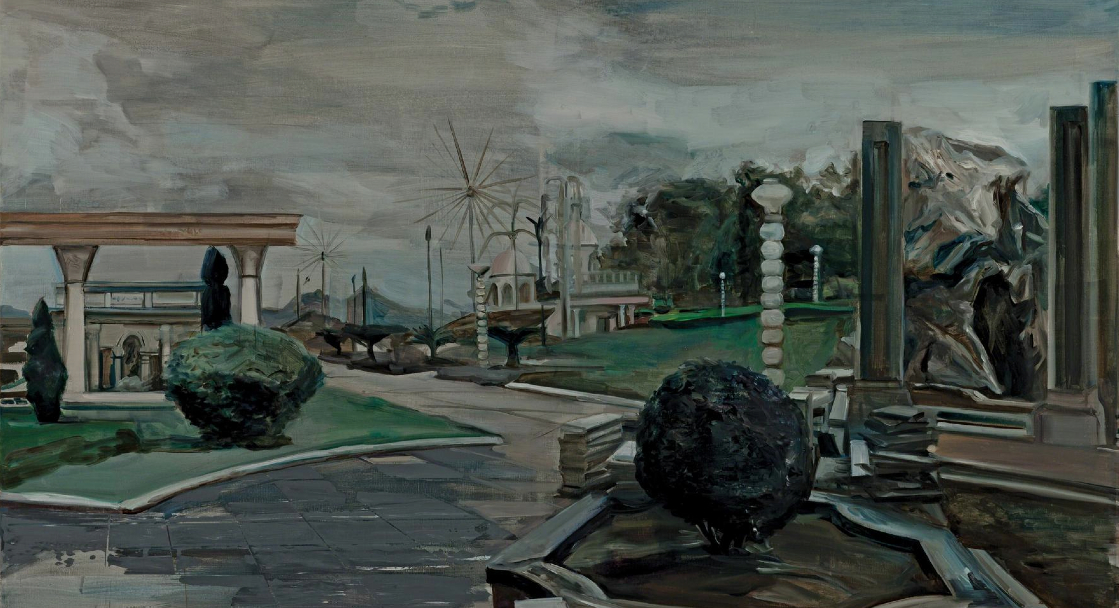 This poem has been drawn from the August issue of the American Reader, available here and in Barnes & Nobles and independent bookstores nationwide.

Aglitter in the dromedary dawn
with cold rubles, the old cyclone
boasts come what come may, sir.
Like a silly curlicue, for instance,
that you called August. It too had
a way, prescient and plunderable,
a mix of corsage and assemblage,
or coconut if you can imagine it.

A wax cylinder in the wind was
carrying us chevalierly through
the alphabets of petite longings,
our gumption of restless itching.
If we stop here it’s because here
it’s thick dusk. Streaming ribbons
from the sun, yellow fields of sky
matriculating without thinking.

Yesterday, the dazzlement washed us
away like laundry boats bedraggled
toward a ventilated hexagon of sea,
its coils and plungers, its plumber’s tape
amid lulling processions of joggers.

One spring patio is for rodeos
niggled with iodine figures, weaved
tapestries inside vast tuileries.
But that reminds me, how exactly
do words form brittle histories—

rummaging a basement heap, a guttural
section, suppose, or an anatomical plane,
a slice of what should be and has been said
but wasn’t, like some yogurty radio static
giving way assuredly to sweet hosannas.

We bench-press archways with our eyes
recalling a time when we actually had eyes.
Yes, that was eons ago, gazing inside at TV
bunkers as Shock-&-Awe hunkered down

for supper, a roseate ghostly assembly line
producing but bruise. I could use a good one
come to think of it. And nickeled-and-dimed,
halter-top waters rise. Ferries a-glint with

restaurant dementias. Some happenstance
meant to be talked about. We’ll have to let be,
with addled doo-wop and haughty pince-nez.
Alone here in the river walk you buoy it all.

You, walking stick, are emptier in a crowd,
though not as empty as one.
Amateur, I’m watching your surveys shrug
to the ground, dear and ruthless. The

fiesta has begun. And waffling in the breeze,
this is the time to reprogram
an ideogram or two, flinging pants off
for stoic sleepiness.

pirates of our wonderfully dull childhood
where a perverted man
usurps your surname and wanders the lawn,
sprinkling reindeer tears.

Just as to love is to doze, so what I crave
is to nose about. I, however,
in 17th-century fashion, stare at your chaps
of frolicking gold, apparel

that includes a spigot, which cargoes some
mumbling grudge in its hull
quarters to Tribeca. There we can arrange
a spotted coordinate for the Star,

It only takes a brochure in your palms to let me see
native Indias and corpulent Africas open gently
your cornet wrists, your marigold-clumped brow.

People should be able to account for something in
what they desire or they roam fore’er, secluded
under western bandanas. This leads to reclusiveness.

Extreme passivity, pus ocher and the like. General
spiels of uneasiness. I should know, happening to be
one myself, a curmudgeon crayfish like Fantômas.

A board was laid out. It had your legs on it, suspended
scissor-like. A mode I knew from albums. Speaking
of which, one bum was overheard saying to the other,

“I like your bum.” Quite moving mumbo-jumbo really.
One door slices us to the next, the tunnels funnel us
into faraway space with pristine shops. You snicker to

friends across absolute distance. They always ask
me the fable of my life, the accurate one, replete
with liquid bones to pick at or throw as testimony.

I prefer sassafras to crème brûlée on any given day.
Brutal and cunning, but unknown, I love cyclists.
So a cloud curtailed me. And I awoke horizon.

I take refuge in each skittery movement and moment
I’m given when not forced to dwell on a monument.
Iron’s the last bastion afforded to a materialist state.
Next to gentle gardens, for a bit, we argued. Polluted

scales were a kind of resolution to wrestle us from
ourselves, though I kept noticing the way our lips
pinched themselves accidentally, how vanity roped
around our waist, delicate and burnt, as if dread

had come into the room with a waltz on our breath.
At such gestured pace, you induce a sigh. Yes, you
ignorant child, those fireworks were yours…This time
they were. Pyrotechnics fade. Experiments not

talked about until today in the skyrise of cabinets
and windows of papers flustered from sunlight
rise like a Goth girl costumed in hardened beeswax
whose tattoo reads Buried on the Breath of Dawn.

my love of the real. One who will be for the future, if only
to turn back his long and lioned head with remorse code.
Acknowledging acknowledgments. Like a magnet we drifted
in a boy’s blink for years not knowing we were drifting.

It is always dusk here. Mechanical animals wait for us.
We wait for each other. Berry-eyed and bituminous, a tortoise
of waiting and wanting, mating and pray mantising. So
what are you really interested in, Pythagoras?

Things as they are, or judgments? Careful, the truth’s a pill,
so chew before swallowing. Maybe it’s just a trompe l’œil
effect, on second thought. Even so, it is what it is, and
what it is, we must swallow. And we do. We do.

This poem appropriates some of its words and images from John Yau’s The United States of Jasper Johns. “Fantômas” refers to a French character of crime fiction whose cinematic adaptations inspired, among other painters, the cubist master Juan Gris. Dedicated to Henri Rousseau, the poem is inspired in part by Stars of the Lid album And Their Refinement of the Decline.