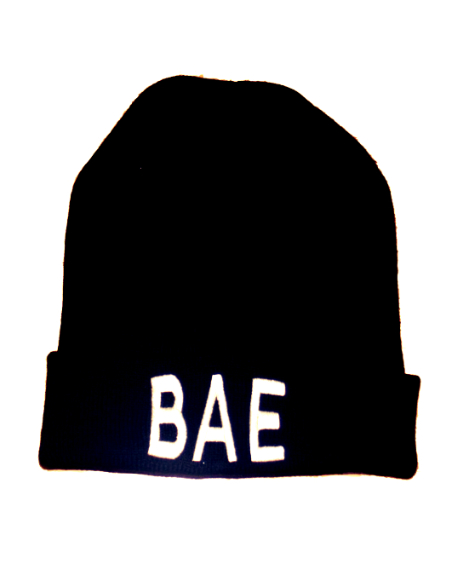 In my last column I sketched brief histories of two #trending slang words that existed long before their recent surges into popular culture. “Twerk” and “shade” developed organically out of two local and marginalized communities (hiphop dancers in New Orleans, drag queens in New York), only to be adopted (and bastardized) by mainstream culture years later. This appropriation arguably serves as the “death,” in part or in full, of the words in question; not only do they cease to define a specific cultural moment or practice, but they begin to mean such different things to different communities that the use for the word is lost in the shuffle.

This week I look at two examples of a very different kind of etymological rise. “Bae” and “basic” do not have the cultural pedigree of shade and twerk; there is no use of talking about purity or original usage. This is because both words were developed so recently that their definitions and usage have been digital negotiations from the start. Ironically, this makes more recent etymological histories more muddled and difficult than the older lineages of the last column. With these new words, the question is not whether their new meaning correlates to the original usage, but whether there was ever a correct original usage whatsoever.

Compared to the long, rich histories of “twerk” and “shade,” “bae” is an infant. Although the term appears in rap songs since 2005, it first gained traction in popular/internet culture in 2012. 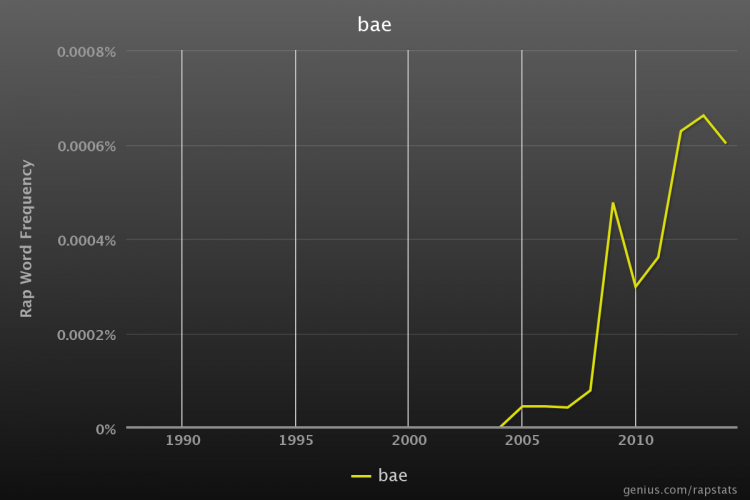 There’s already an excellent history of the term as a meme, which highlights just how new this word is. Imgur and Tumblr photos with “bae caught me slippin” spread like wildfire in 2013, and this year the unsubtle “you got a bae? or nah?” keeps showing up on t-shirts and in horrific songs. Speaking of songs, Miley’s back again, in the video for Pharrell’s “Come Get it Bae,” a dark horse for song of the summer 2014. This is probably what prompted non-internet-hip folks (not sure, I don’t know any) to wonder about the word, inspiring a charmingly unhip explanation on TIME.com and a weirdly pathetic one on Esquire. Expect a Today Show segment soon.

The most interesting thing about “bae,” though, is that there has never been a consensus on exactly what it means or where it comes from. It refers to a lover/partner, sure, but is it an abbreviation of “babe” or “baby”? Does it stand for Before Anyone Else? Surely these debates contributes to squares’ confusion over the term. They also foreground the particularly digital nature of bae’s origin and rise. Like so many words, “bae” seems to have come from hip hop/black communities; however, its meteoric rise came from young people using social media. These two communities overlap, of course, but the tumblr effect made “bae” a teen trend before it gained any nuance in rap culture. The word was stillborn; there’s no effective difference between bae and babe, bae and boo. Moreover, the spike in popularity makes bae truly postmodern slang; it became viral because it was viral, without offering any new linguistic “content.” In other words, “bae” is an empty slang vessel, the TIME.com of words. We might also call it a zombie; its meaning was dead from the beginning, but it lives on, mindlessly.

Yes, the internet changes how slang lives and dies. The history of “basic bitch” is remarkably similar to that of “bae,” even if the term has a more specific meaning. Most accounts attribute the phrase’s early usage to a remarkably unfunny Youtube video/comedy routine by @LilDuval in 2009. In the following years, the term gained popularity in internet circles, with tumblrs like Basic Bitch Today and Facebook pages like “I make bad bitches look like basic bitches” spreading the mythos of the basic. As these examples show, the term quickly came to be used by women (or gay men) expressing their own superiority or bravado; such is the case in Kreayshawn’s “Gucci Gucci.” The terrible song’s terrible refrain (“Gucci Gucci, Louis Louis, Fendi Fendi, Prada / Them basic bitches wear that shit so I don’t even bother”) shows that “basic” has come to represent not so much uncouth (female) behavior as thoughtless and banal material consumption. Ditto for the copious references to Ugg boots and Pumpkin Spice Lattes in “basic” humor over this time. This material consciousness carries over to College Humor’s video from earlier this year, “How to Tell if You’re a Basic Bitch,” which is probably the most mainstream iteration of the standard basic bitch gag. More meditations on the nature and definition of basic appeared in the video’s wake, presumably because many of its viewers were basic, or at least clueless. Once again, TIME.com is on the case; someone needs to explain to me what is going on with that site and their target audience. In related news, I am open to becoming the language blogger for TIME.com.

Of course the second, sometimes unspoken word of “basic bitch” reveals the term’s fundamental misogyny; in her taste in clothes, consumer products, and popular culture, the basic bitch conforms to the most bland and uncreative stereotypes of late capitalist femininity. Explicitly male/masculine uses of the term are especially insidious; jokes about basic girlfriends reek not only of a disgust of female mass culture, but of women in general. It’s also worth noting that feminist critiques of the term appeared within the first week of its use. But as I mentioned before, the term is often used as a distinction of femininity: I am feminine, but not basic. This is what makes the Beyonce gif so perfect for the term; Queen Bey is no stranger to being a figure of superior womanhood (see also: I woke up like this). In naming the basic bitch, the speaker identifies what she is not, and there finds the perils of modern womanhood. Beyonce serves as an appropriate antithesis.

The mottled history of “basic” leaves us in a bit of a quandary; has the increasing popularity of the term led to the death of its meaning? Or did it ever mean anything to begin with?

“Basic bitch” remains fascinating because it by necessity refers to someone who is other; one of the defining characteristics of the basic bitch is that she doesn’t know she’s basic. Arguably this means that the more people become familiar with the word, the less useful it becomes; there are literally less basic bitches to name. Anyone familiar with the term knows that actual basic bitches are not important for the word’s use, though; the basic bitch names an absence, a vacancy, a phantasm. The basic non-being may become more generic as the term gains popularity, but wouldn’t that it mean it is getting more basic?

In my next column I will look at two more apparitions that have haunted 21st century popular culture: the hipster and the bro. Combined, they form the yin and yang of contemporary (mostly white) masculinity, and like the basic bitch, otherness and absence is fundamental to their meaning. Stay tuned!