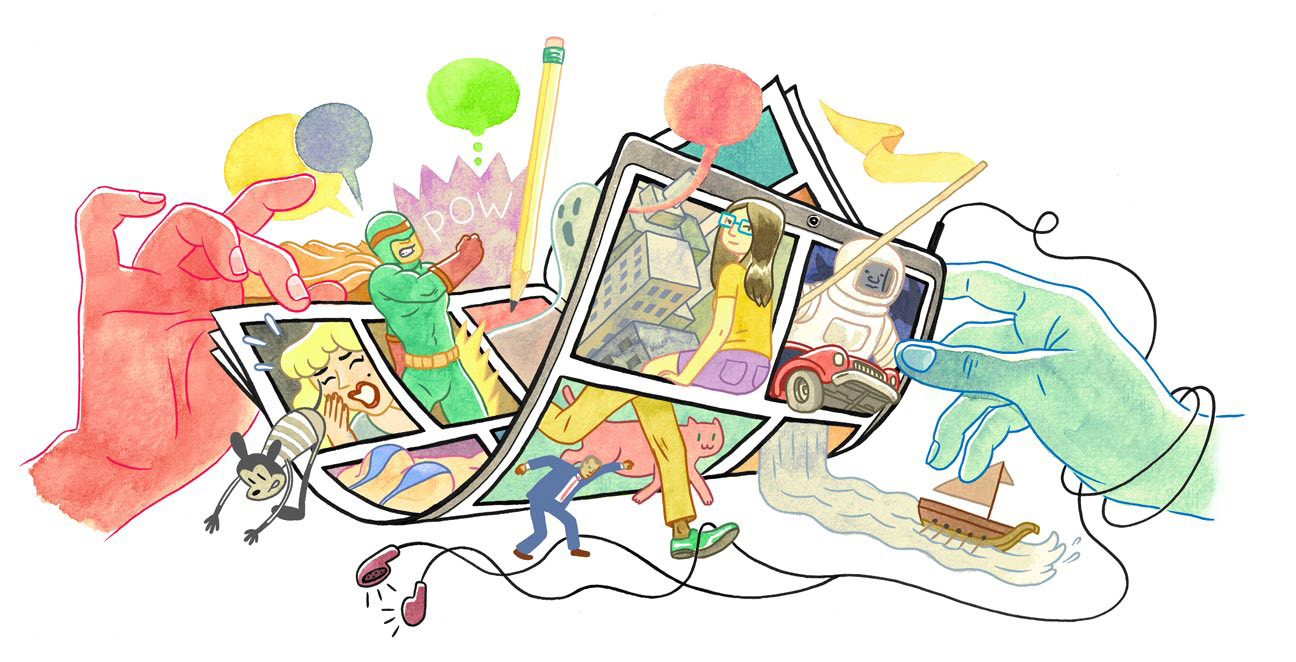 On the first day of art school, I arrived prepared.

I toted my 30 pounds of required supplies into the classroom, having carefully chosen each expensive paint tube and special willow charcoal from the three-page “class requirements” list.

I sat at my splattered easel among the other 18 year olds with artfully dorm-cut hair and uneasy attitudes of projected disinterest, and looked towards my new professor.

He looked up from his fingernails, examined our shining faces, and announced that “Painting is dead.”

I suppose with that sort of introduction to fine art, it’s no wonder I became a cartoonist.

Of course, working as a comic artist while balancing on the shifting tectonic plates of the publishing industry comes with its own discouragements. When people find out what I do, their faces quickly turn from interested surprise to concern.

The defeatist attitude of art school has fortified me for the constant media hand-wringing over the state of the printed page.

Or perhaps it just turned me into a willfully blind optimist.

Of course, I’m lucky to have come of age now, in a dawning age of graphic novel appreciation, rather than when “being a comic artist” essentially meant that you would be stuck in a room for your whole life, churning out Batman pages for a pittance.

No, I’m lucky enough to see incredible modern examples of graphic novels that breached the previously impenetrable divide between “the comic-book world” and “The real world.”

Now we have such literary and artistic lovelies as Fun Home or Maus, politically informative works like Persepolis, or deeply personal narratives such as Epileptic, and Stitches. New masterpieces, like Craig Thompson’s Habibi, or journalistic pieces, such as Joe Sacco’s Palestine, expand the genre in exciting new directions.

These and many others have entered mainstream appreciation and given comics a new respect. They’ve also given young artists like me confidence in what we do.

A few years ago, I taught comics after-school for kids ages eight through twelve. I was working through a masters program on the techniques and history of comics, and as happens so often with graduate studies, the total consuming immersion had left me feeling like what I did was ridiculously useless.

Why make comics when so few adults actually read them? Why make comics in a country where the publishing industry generally marginalizes and ignores them?

As corny as it sounds, I found the answers to these questions by watching my students. Without fail, every one of them had been making comics in one form or another since they could control a crayon. While I spent my days (and usually nights) agonizing over scripts and stylistic choices, those kids churned out fantastic stories and great drawings to accompany them in a seemingly effortless output. It impressed me, intrigued me, made me jealous.

As children, everyone learns to read using picture books (comics), learns to express themselves with drawing and writing (comics), and grows up to make Powerpoint presentations and progress charts (boring comics). Making images in order to tell a story is as basic to human nature as cave painting (very early comics).

Somewhere in childhood development (at least in America), we’re told that the pictures aren’t important any longer. I watched this happen as my students went from scribbling eleven-year-olds to reticent twelve-year-olds, who balked and complained that they didn’t “know what to drawwwww.”

Some of it is adolescent self-consciousness, certainly. Competition and frustration can intimidate young artists, but much of this change is due to the social implications that discourage us:

How many picture books for adults do you see on the shelves? How many 35-year-olds take the time to sit and draw in a journal? Excepting my own, how many masters theses are turned in accompanied by hand-drawn illustrations?

Pictures with words are intrinsic to our history and nature—why then are pictures always the first to go?

When the newspaper industry began to have serious trouble, the first response for many papers was to immediately drop the syndicated comics from their print. No expensive syndicate to pay, no expensive color comics to print; it would save them a bundle!

As you may have surmised, it didn’t go quite as planned. Readers felt that the humanizing, community feel of their papers was lost with the change, and in the end, cutting the comics didn’t really save many newspapers from going under.

But this certainly changed syndication. Cartoonists were already turning to alternative methods of getting their work seen when the dream of syndication became untenable. Why work for a company or syndicate when you could publish for free online, manage and edit yourself, gain a following, and make money through ads, books and merchandise?