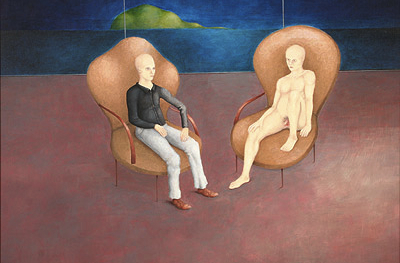 These stories have been drawn from the November issue of the American Reader, available in our Shoppe.

She took up a strand of her past—turned it, folded it over itself. She made a tight twist, pressing the end of it not gently, and in so doing, she preserved some famous locales, green fields, buttons of shrubs, once again.

It was one of those get-togethers with memories that people have, but she had never had a reunion like this before—where many years after the fact—she also welcomed a huge fresco and some liturgical objects.

While she had these recollections, she rode the M1 bus, straight down Fifth Avenue. Other passengers made her feel sad or worried or—what was the opposite of contemptuous?—oh, yes, admiring, very admiring.

Earlier in her day, there had been a mass of water in the bottom of her fruit bowl.

She had taken out—in order to dry them—the nice and the good apricot, the several clingstone peaches—wiped the moisture from the bowl, and reassembled the lot.

This same day, this afternoon, she had embraced Eleazar in a corridor of a restaurant. She didn’t think they would ever meet again. She had kissed him on the mouth. It was one of those get-togethers that people have, but she had never had a reunion like this before where true feelings that were unclear in the past are made even less painfully clear.

She watched a boy on the bus with his knee up under his chin. Some people might think the boy would be worried that he was ill-fitted for his undiscovered future, that he already had something like a belief in his own failure.

Keeping calm, she coughed up deep red flowers and she braided and pinched the tiniest details that clustered around her happy, young days.

A vast hill had to be enlarged because from up there—there was still not enough of a view.

“Is this what you don’t want?” Miss Natchez asked.
“Yes,” the woman said.
“Pam!” a man said, “I have this here, if you’d like to look at it.”
Pursuing him, into the next room, the woman saw some other shoppers tipped into their places.
The man attended to Pam and Miss Natchez helped out with Pam also.
They recommended something they talked her into.

Pam washed her face and her upper body at her bathroom sink when she returned home.
Better to have a full tub bath.
She unlocked the chain around her neck, disengaged herself from it, and its links spilled and then stacked themselves inside of a dish.
She gave out one of her short-hand, pitched yells when she fell short of the tub, much like a tossed child, flying through space, because of the fact that somebody didn’t prefer her.