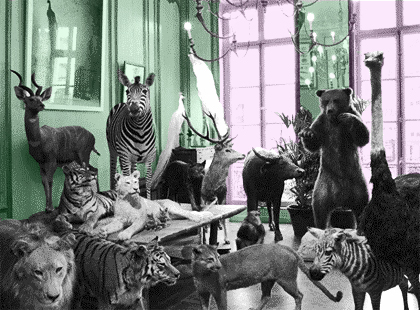 I remember my mother telling me a story she’d heard when we lived down South. With her own Yorkshire Terrier, Raleigh, lying beside her, she recounted an urban legend of an elegant North Carolinian who had her beloved terrier stuffed when it passed away, so that its stiff little body could sit forever on her puke-colored Chesterfield sofa. Some children would have been frightened by this; I was fascinated. Around the same time, news sources were whispering about cryogenics. I wondered: is cryogenics a type of taxidermy? If you “freeze” a person, do they too become an object, like that stuffed dog without a soul? (I tried out my own twisted act of preservation, when I shellacked a few red, hollow ladybird beetle shells.) Years later, my father took me to visit the Parisian taxidermy shop Deyrolle and the local Museum of Natural History, and I fell deeper in love with stuffed beasts (especially the Dodo bird).

Back in Paris last week, I visited Deyrolle for an evening cocktail party. Whenever I return there, I buy another beetle from the backroom for my collection, but on this occasion nothing was for sale: not the avian hybrid (“phoenix”); not the elephant or giraffe; not any one of the insects playing dead in the drawers. That night, I remembered another taxidermy shop not too far away, with a sign in the vitrine declaring that all of its stiff inhabitants had died of natural causes, at zoos. (This does not apply, though, to the handmade chimera or centaur that watches as you shop.) A month ago, I’d seen my ultimate entomological fantasy in a back room somewhere in London’s Hoxton Square: a mirrored wall covered in stripes of matching creepy crawlies’ bodies arranged by Damien Hirst, the artist, and also the man who tried to prevent the contents of Walter Potter’s original Bramber, Sussex Museum of Curiosities from being separated at auction.

Pop culture owes something to Potter and his dioramas, the influence of which is visible in films like Wes Anderson’s Fantastic Mr. Fox and the recent remake of Dinner for Schmucks. Like most good things, taxidermy was appropriated by some superficial pockets of culture, and soon lost its cred mid-2000. What’s still authentic are people like those described in Susan Orlean’s 2003 world taxidermy championship for the New Yorker (same year as Potter sale) or regular visitors to MART www.roguetaxidermy.com. It seems that taxidermy’s day will come around again. (Hope the same goes for the Yorkie.)